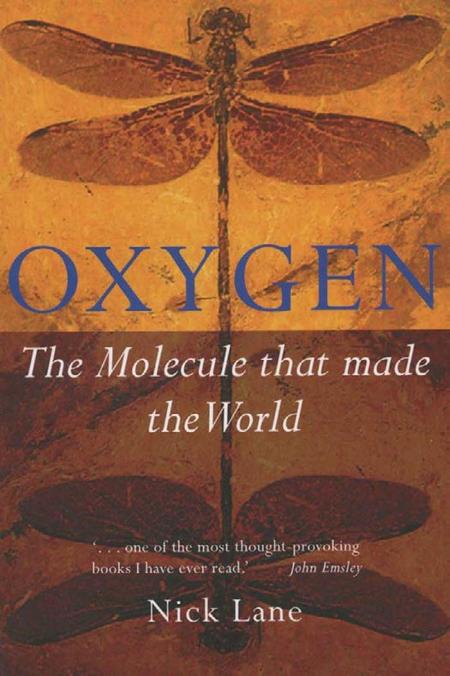 Oxygen has had extraordinary effects on life.

Three hundred million years ago, in Carboniferous times, dragonflies grew as big as seagulls, with wingspans of
nearly a metre. Researchers claim they could have flown only if the air had contained more oxygen than today -
probably as much as 35 per cent. Giant spiders, tree-ferns, marine rock formations and fossil charcoals
all tell the same story. High oxygen levels may also explain the global firestorm that contributed to the
demise of the dinosaurs after the asteroid impact.

The strange and profound effects that oxygen has had on the evolution of life pose a riddle, which this book
sets out to answer. Oxygen is a toxic gas. Divers breathing pure oxygen at depth suffer from convulsions
and lung injury. Fruit flies raised at twice normal atmospheric levels of oxygen live half as long as their
siblings. Reactive forms of oxygen, known as free radicals, are thought to cause ageing in people. Yet if
atmospheric oxygen reached 35 per cent in the Carboniferous, why did it promote exuberant growth,
instead of rapid ageing and death?

Oxygen takes the reader on an enthralling journey, as gripping as a thriller, as it unravels the unexpected
ways in which oxygen spurred the evolution of life and death. The book explains far more than the size of
ancient insects: it shows how oxygen underpins the origin of biological complexity, the birth of photosynthesis, the sudden evolution of animals, the need for two sexes, the accelerated ageing of cloned animals like Dolly the sheep, and the surprisingly long lives of bats and birds.

Drawing on this grand evolutionary canvas, Oxygen offers fresh perspectives on our own lives and deaths,
explaining modern killer diseases, why we age, and what we can do about it. Advancing revelatory new ideas,
following chains of evidence, the book ranges through many disciplines, from environmental sciences to
molecular medicine. The result is a captivating vision of contemporary science and a humane synthesis of our
place in nature. This remarkable book might just redefine the way we think about the world.

Oxford Landmark Science books are 'must-read' classics of modern science writing which have crystallized big ideas, and shaped the way we think. Oxygen: The Molecule That Made the World [Audiobook]

The Future of Atmospheric Oxygen