The Grail Guitar: The Search for Jimi Hendrix's Purple Haze Telecaster, Chris Adams takes readers on a fascinating mystery tour to determine whether a Fender Telecaster bought secondhand in a London music store in 1973 was the one used by Jimi Hendrix to record "Purple Haze" in January 1967. The only clues are its left-handed tuners and the salesman's chance remark that the guitar was brought into the shop by a Hendrix roadie. But these are enough to set the author off on this intriguing journey into Hendrix history.
With firsthand details from model and socialite Linda Keith, who discovered Hendrix in New York, Adams recounts how the rising star left for London with a white Stratocaster belonging to Keith Richards. The man who made Hendrix's pedals explains how this Strat failed to make the "Purple Haze" recording session and how it was replaced by a borrowed Telecaster. As Adams tracks down the surviving musicians, they shed light on the fate of that Telecaster and... 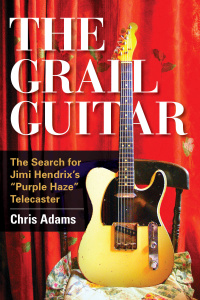